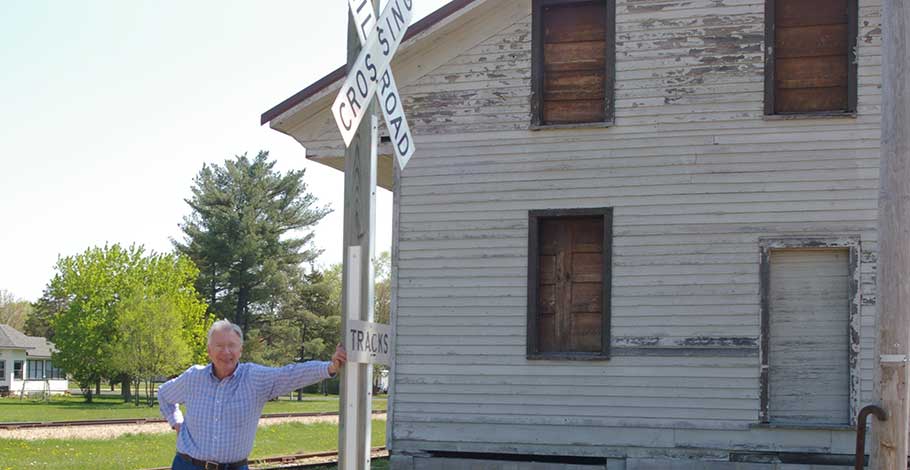 “Catherine watched intently as the train pulled into the station – whistle blowing, drive wheels screeching, bell clanging. ‘Why can’t the train stop and let Gusta out at our farm?’ she said. ‘The track runs within fifty yards of our house.’” – Bittersweet Harvest

The places in my O’Shaughnessy Chronicles novels are based on real life. The little town of Willow, in real life, is the village of Avoca in Iowa County, Wisconsin. Tiny Avoca, population about 650, is near the Wisconsin River, 25 miles west of Dodgeville.

From 1918 to 1925, my grandparents owned a farm just east of Avoca. My mother, Laura Annette Fitzsimons, graduated from Avoca High School in 1924. The train tracks leading into Avoca did, indeed, pass very near their farmhouse.

At the time, the tracks were part of the famed Milwaukee Road, which at its peak in the mid-20th Century carried passengers and freight from Chicago thousands of miles westward, all the way to the state of Washington.

The Avoca depot building, which still stands today at 502 Front St. near downtown, was constructed in 1858. Local lore says it was moved once, and relocated about a block from its original site. The date of that move, and the reason for it, is unclear.

Just two years before the depot was built, in 1856, the Milwaukee and Mississippi Railroad had laid tracks through what would later become the village of Avoca; it was simply then part of the surrounding town of Pulaski.

The rail line through Avoca was all part of a grand plan by the Milwaukee and Mississippi Railroad to run a rail line across Wisconsin, from Milwaukee to Prairie du Chien on the Mississippi River.

The Milwaukee and Mississippi Railroad

The Milwaukee and Mississippi Railroad had begun by laying a line from Milwaukee to Waukesha in 1851. That was extended to Madison in 1854, continued into western Wisconsin and finally, triumphantly, reached Prairie du Chien in 1857.

After the coming of the railroad in 1856, the future village of Avoca boomed as a regional trading post, known for its lumber, wheat and hogs. Its first commercial business, a store near the railroad tracks, opened in 1857, a year after the railroad came through. Also in 1857, a hotel, larger general store, post office, church, and school were constructed, and the community’s first white child was born.

Avoca was finally incorporated as a village in 1870.

In 1883, a 25-year-old depot agent arrived at Avoca who would define the agent’s job in the heyday of the railroads. Astonishingly, Dan Bohan was still running the Avoca Depot in 1944, at the age of 86.  You can read the 1944 Wisconsin State Journal article about Bohan’s many years as the Avoca depot agent.

After World War II, the popularity of automobiles brought an end to railroad’s golden age.

In 1958, the Avoca depot was converted into a feed mill by area resident Don Parrell and his son, Dave. It remained a feed mill until 1997.

Today, the depot building is owned by the village of Avoca, which uses it for storage. Village Clerk Susie Ziebarth said the 156-year-old frame building, while weathered, appears structurally sound. The Avoca Village Board “would like to fix it up, to make it look nice again,” but there is currently no specific plan for how to accomplish that, Ziebarth said.

An active Wisconsin & Southern Railroad freight line still runs through Avoca, regularly rumbling past the depot but no longer stopping. Unlike some other depots of its vintage, that have been restored, the Avoca depot is not on the National Register of Historic Places.

Historical Photos of the Avoca Depot

Follow the links below to see pictures of the Avoca train depot over the years. 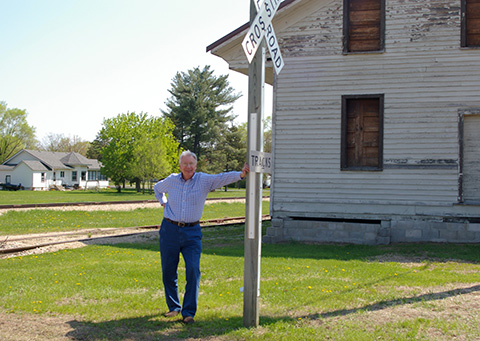 Novelist Harold William Thorpe, at the depot and railroad tracks in Avoca, Wisconsin.

The O’Shaughnessy Chronicles, set in Iowa County, Wisconsin are based on real people, places and events in Harold Thorpe’s family history. Learn more.