The shift from horses to tractors on Wisconsin farms

If you grew up on a Wisconsin farm prior to the 1950s, you probably had work horses. The day that your family finally sold them, and replaced them with gasoline tractors, might be a vivid childhood memory.

“Will, did you ever consider that they might think your resistance to modern machinery is a bit peculiar, too?’ ‘That’s different, Mary. These Southwest Wisconsin hillsides aren’t suited to tractors and large machines.’ ‘I think you’re not wanting to lose your horses.”  —Bittersweet Harvest

Farm horses were typically gentle-giant draft horses such as Percherons, Clydesdales, Shires, or Belgians. Some draft breeds are said to be descendants of medieval war horses.

Draft horses were first brought to the U.S. from Europe in the late 1800s. Weighing up to 2,000 pounds each, they were used for the heaviest of jobs – carting logs to sawmills, breaking cropland and hauling loaded-down pioneer wagons westward. Later, they powered threshing and other farm machines and drew urban trolley cars. 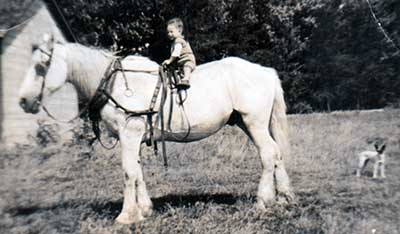 In the mid-20th Century, however, technological advances brought an end to the farm work horse era. In the O’Shaughnessy Chronicles, Will O’Shaughnessy resists that evolution, hanging onto his horses long after neighboring farmers have traded them for gasoline-powered machinery.

The shift from horses to tractors on farms

The historic shift from the use of horses and mules on farms to the use of tractors is starkly evident in U.S. Census of Agriculture records. The census kept track of a myriad of agriculture stats across decades, from acreage in production to the number and types of animals on a farm, to the demographics of human farm workers.

The types of items counted in the census, meanwhile, underscored how quickly farms were becoming mechanized – both in the barn and in the house. The 1954 census, for instance, tracked how many farms had modern conveniences like telephones, electric washing machines, piped running water, milking machines, home freezers, and various kinds of trucks and tractors.
Wisconsin mirrored the national trend. 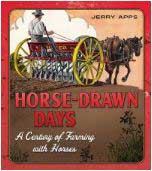 Do you have childhood memories of farm work horses or your farm family’s first tractor? Share them with us on Facebook.