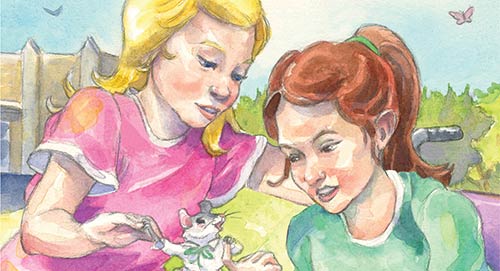 Bellamy’s Ball, Harold W. Thorpe’s 2015 picture book about a Wisconsin girl who uses a wheelchair and learns to dance alongside her friends, is fiction. In real life, the idea that everyone can dance, regardless of physical limitations, is finally taking root here in Wisconsin. This introduction to our four-part series looks at where wheelchair dance began decades ago, and where it’s headed since.

It’s been nearly a half century since wheelchair dance was introduced in Sweden in 1968.

In the U.S., three groundbreaking, physically integrated dance companies all still around today — Dancing Wheels in Cleveland; AXIS Dance Company in Oakland, California; and Infinity Dance Theater in New York City – were founded in 1980, 1987, and 1995. Their “standing,” and “sitting” dancers, some of whom have other physical limitations like missing limbs, all perform together, and collaborate on new works.

In 1997, the Joffrey Ballet in Chicago cast a boy with cerebral palsy in The Nutcracker. The role has since been reserved each year for a disabled child. Other dance companies across the country followed suit.

For some, wheelchair dance has long been competitive. Officially called para dance sport, it has been recognized by the International Paralympic Committee since 1998. Para dance sport world championships are now held every-other year.

“If dance is an expression of the human spirit, then it is best expressed by people of all abilities,” Dancing Wheels pronounces on its website.

It’s only in the past three years, however, that doors have blown wide open here in Wisconsin.

Since offering its first dance class for cognitively delayed children in 2013, the Brookfield Center for the Arts has expanded its focus and now has two middle school-aged students in wheelchairs, who have tried out tap, jazz and hip-hop.

In Appleton since 2013, a Wheelchair Dance Sport Association instructor from the United Kingdom has been setting up informal dance parties for children and adults with physical disabilities, whose minds and bodies might benefit from the exercise — and spontaneous fun.

Since 2014, Madison’s Kehl School of Dance had offered “sitting ballet” classes for children and adults who use wheelchairs and walkers. Class members have participated in recitals. A future goal: a physically integrated class for both sitting and standing dancers.

And in 2015, the University of Wisconsin-Whitewater’s Department of Theater/Dance began offering a contemporary wheelchair dance class, believed to be the first of its kind on a UW System campus.

In November 2016, a packed performance by AXIS Dance Company, at UW-Whitewater’s Young Auditorium, was followed by a teacher training with Marc Brew, the company’s guest artistic director and choreographer, and several of its dancers. The two-day class was attended by two dozen dance teachers from across the state, who were challenged to broaden their idea of what dance is, and to take that back to their studios and performance spaces. 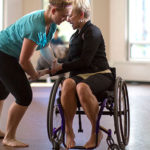 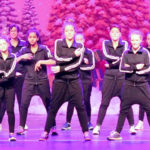 Brookfield Center for the Arts and Wheelchair Dance 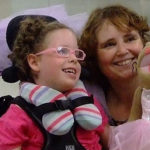 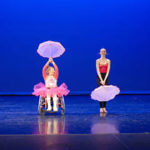 Accessible Dance and the Kehl School of Dance in Madison